Members of the college recognized for outstanding achievement

In the run-up to the U.S. presidential election, the results of another election were announced in Dewberry Hall on the morning of November 3, 2016. The 2016 Outstanding Achievement Awards recognized thirty-five faculty and staff who had been “Elected for Success” by their colleagues. Coordinated by the Office of Human Resources and Payroll, the Outstanding Achievement Awards celebrate the hard work, dedication and achievements of Mason’s faculty and staff across several awards categories and support Mason’s values and mission. The awards ceremonies are held once a year, in the fall. 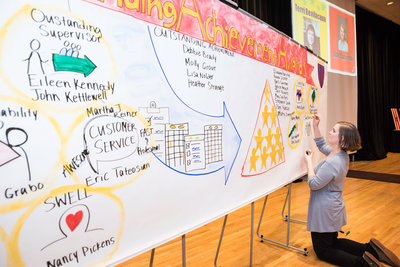 Presided by President Cabrera and Vice President for Human Resources, Payroll, and Faculty/Staff Life Linda Harber, the dignified event paid special tribute to those who continuously go above and beyond in their respective roles to make a Mason a better place to learn and work. Staff and faculty are nominated for the various awards by their colleagues, supervisors, subordinates, or students; nominations are then reviewed and selected by committee. This year, awards were given in sixteen categories with monetary amounts ranging from $200 to $500. Judging by the response of the large crowd, the awards were very well deserved.

We are pleased to announce that quite a few of the award winners are faculty or staff members of the college:

The Digital Learning Award was given to Graziella P. McCarron, faculty member in the School of Integrative Studies, for her work taking her INTS 204 Leadership Theory and Practice course completely digital and continuing efforts to do the same with her INTS 404 Ethics and Leadership course.

The Sustainability Hero Award was given to Carrie Grabo, undergraduate coordinator in the Department of History and Art History for her efforts organizing the GMU Vegan Society on campus and for coordinating the especially high standards of sustainability practiced by her office. 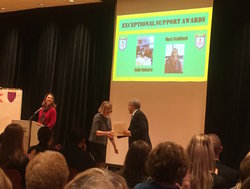 The Mason Faculty/Staff Alumni Award was given to Marcos Martinez, graduate teaching assistant in the Department of English, for his contributions in the development and continuing efforts as editor of the Stillwell Press.

The inaugural Jade Barricelli Spirit of Advising Excellence Award was given to Elizabeth Kalinowski Ohrt, director of advising in the college's Undergraduate Academic Affairs Office, for her leadership in the conception, establishment and expansion of the Mason Academic Advisor Network (MAAN).

Last, but not least, the Faculty/Staff Book Scholarship was awarded to Jessica Massie, office manager in the Global Affairs Program, who is completing a master’s degree in public policy.

Congratulations to all of this year’s award winners!