"Now that 50 years have passed, we want to allow the current generation, the students at George Mason and those in the area, to come in and learn about this tense time period."

Department of History and Art History

The Cold War Museum, the Department of History and Art History, and the College of Humanities and Social Sciences are preparing to commemorate the 50th anniversary of one of the most frightening times in world history.

They will host a half-day conference, “The Cuban Missile Crisis: 50 Years Later,” on Saturday, Oct. 27, 2012, at Harris Theater on Mason’s Fairfax campus. The event will feature panel discussions and “Cold War Conversations” with a group of firsthand participants in and experts on the events surrounding the thirteen days in October 1962, when the world seemed to be at the threshold of nuclear war.

The college recently interviewed The Cold War Museum’s founder and chairman emeritus, Gary Powers, Jr., MPA ’95. Powers is the son of Francis Gary Powers, a former United States Air Force pilot who was flying a CIA Lockheed U-2 reconnaissance aircraft over the Soviet Union in 1960, when he was shot down and captured.

His capture, public trial, imprisonment and eventual exchange spurred some of the most contentious moments in the Cold War.

The text of the interview follows:

When did you decide you wanted to study Cold War history?

When I was at Mason, I started to give lectures to high school students in Fairfax about the U-2 Incident with my father. I was shocked to find out that the students thought I was there to talk about the U2 rock band. That was when the light bulb went on in my head: something needed to be done to preserve Cold War history. That was the catalyst for the creation of The Cold War Museum.

How did it feel growing up and reading about your father in the news?

As a kid growing up, Dad was Dad. I would play with him, I would get in trouble, and I would be a normal kid. I didn’t understand at the time that my father was different than anybody else’s dad. That perception changed on August 1st of 1977 when my dad died in a helicopter crash while working for NBC television (the local affiliate in Los Angeles). As a result of the press, the interviews, the news reporting and the burial at Arlington National Cemetery, I became aware of my father’s role in history. But by that time, I was no longer able to ask him any questions.

In college, I was curious. Some friends were asking me questions. I thought that I’d better take some time to research this incident and my father so that I could respond and answer questions correctly. That is what got me on the path to be interested in Cold War history.

Your father has been awarded numerous posthumous recognitions over the last 12 years. How do you feel about this recognition happening now?

Consider the geopolitical situation during the Cold War, specifically with the U-2 Incident, including my father’s involvement, the shoot-down, the trial, the imprisonment, the spy exchange and the whole thing. When an event happens, and it’s front-page news, there are always going to be people on both sides who think one thing or the other. It takes history, it takes historians, and it takes time for the actual series of events to be clarified and known. At the time that Dad was brought back home, it was still very sensitive; it was a very tense period of time.

The American government, the CIA, and the Air Force were not able to set the record straight at the time because it would have contributed to the release of classified information that would have helped the enemy. It took years for the declassification process to start. In 1998 there was a declassification conference in Washington, D.C., where it was revealed that Dad was at his altitude when he was shot down, that it wasn’t a flameout or sabotage or any other conspiracy theory. My dad followed orders, did not defect or collaborate with the enemy, and did not spill his guts and tell the Soviets everything that he knew. He was basically able to prevent the disclosure of information during the interrogation process and the trial. It took 36-to-38 years for the truth to be known.

What awards did your father receive over the last 12 years?

In 2000, Dad was posthumously awarded the Prisoner of War Medal, a CIA Director’s Medal and the Air Force Distinguished Flying Cross. That was all because of his bravery and loyalty and the harsh things that he endured between 1960 and 1962. Our family was very honored, proud and humbled to know that Dad had received these medals.

Another 10 years went by, and I read that [US Air Force] Captains Bruce Olmstead and John McKone (who had been captured and held in a Soviet prison during the same time period as Powers) had received Silver Stars. I wondered if this set a precedent for my father receiving the award.

I wrote a letter to the Pentagon Military Order Review Board, presented my facts and findings, and asked if this met the precedent. Lo and behold, a year goes by, and I get notified, “Yes, it does.” My father was posthumously awarded the Silver Star in June of this year. It was great to know that after 50 years, the American government finally was able to help set the record straight. And it just goes to show that it’s never too late. It would have been nice had this been able to happen while my father was alive, but unfortunately, he died in 1977.

Why should people know about Cold War history?

When we first started The Cold War Museum, it was incorporated as the Francis Gary Powers Museum for the Study of the Cold War. Right from the beginning, everybody, including myself, referred to it as The Cold War Museum. We all realized that Dad was just one small part of the Cold War, and in order to help preserve this history, we had to undertake an effort to preserve Cold War history and not just Dad’s history.

The Cold War was a 45-year period of history. If you look at the world today, it is the direct result of the period. The ending of the Cold War put us on track for the War on Terror and the international dilemmas that we now face. It is very important to teach people today about the Cold War so they understand what took place, how it happened, why it happened, and how to prevent those similar types of things from happening again in the future. We don’t want to repeat history, and are hoping that The Cold War Museum will allow people to learn from their past in order to make the world a better place in the future. 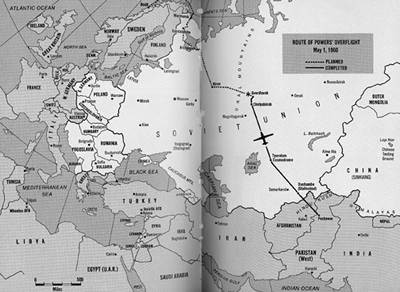 Why do you think The Cold War Museum has grown so much?

From 1996 to 2010, I was leading the effort forward. I was lecturing, taking around a mobile display on the U-2 Incident, and doing everything I could to grow the museum, get support, get sponsors and open up chapters in foreign countries and other states. The Cold War was a world war. It affected every country. We want to make sure that The Cold War Museum preserves the international aspects of Cold War history, not just the American viewpoint. This is why we have six chapters (three in the U.S., and one each in the Caribbean, Berlin, and Moscow). It’s very important for the museum to be comprehensive on the Cold War era and not just be limited to one side. It needs to show a fair and balanced interpretation of Cold War history.

I was the spearhead. But it’s because of the board of directors and their help, and because of people who believed that this museum needed to be founded to help preserve this history, that this museum grew. We are still in an infancy stage, even though we now have a physical location (in Vint Hill, Va.) and we are working with George Mason University on this conference. We also have a mobile exhibit that travels around the country, and we are still looking for support from corporations and individuals to help preserve this history and make sure that we succeed.

How do people react when they hear your name?

It all depends on how old the people are that I’m talking to. People who are 50 years and older usually will recognize the name. Others will go, “Oh Gary Powers, the guy who got shot down.” If they are 45 or younger, they may not have studied the Cold War or the U-2 Incident, and it’s not something that was front-page news at the time they were growing up. So they don’t have a good recollection of it.

I’ve discovered that people who recognize the name are usually older, unless they are military brats, history buffs, in the Air Force or studied this era. I’ve also discovered that Dad is better known in Europe and in Russia to the general public than he is in America.

What experiences do you remember the most from your time at George Mason University?

From when I was at Mason, it has completely changed. There are parking decks and beautiful dormitories, and it’s amazing what they’ve done in the last 15 years.

I took various public administration classes. The teachers I remember were Hal Gortner, Brack Brown, John Cole and James Pfiffner. Louise White was the chairman of the department at the time. Russ Cargo was very instrumental in teaching me about nonprofit management. It was through his course that I created the articles of incorporation and the bylaws for The Cold War Museum.

I have some very good friends from George Mason who I still am in touch with. The co-founder of The Cold War Museum, John Welch, MPA ‘95, graduated with me. It was just a great time. And I didn’t know at the time how good a school it was. It was in Virginia, I was living in Virginia, and I wanted to go to graduate school. So I applied at American and George Washington and Georgetown and I couldn’t afford those. Then all of a sudden, George Mason popped up as an option. It had in-state tuition, good professors, and it was just an all-around excellent school for what I was looking to do.

Why are you having this event at George Mason? And what do you expect the audience to take away from this event?

It’s the 50th anniversary of the Cuban Missile Crisis, the closest that America and the Soviet Union ever came to an all out nuclear conflict. It would have annihilated the planet. Now that 50 years have passed, we want to allow the current generation, the students at George Mason and those in the area, to come in and learn about this tense time period. They will be able to hear from firsthand participants who were actually there flying over Cuba. They will be able to hear from Sergei Khrushchev, and other authors and experts, about the Soviet views of the Cuban Missile crisis, from their perspective. We have assembled an all-star cast of firsthand participants and knowledgeable experts to help teach and educate those in attendance about this time period.

We’d like them to be able to walk away with a better understanding of what the Cuban Missile Crisis was then, and how its interpretation has evolved over the last 50 years.

Department of History and Art History