"I know how powerful a resource this platform will be to readers of Renaissance drama.  And it couldn't be in better hands that those of the RRCHMN and the Folger."

In June 2016, the Folger Theatre and RRCHNM will be holding a workshop called "Beyond Access: Early Modern Digital Texts in the Classroom" for select university faculty to explore classroom applications for digital playtexts included in the new anthology.

The Folger Shakespeare Library recently began a massive undertaking. Located on Capitol Hill, the home of the world’s largest Shakespeare collection wanted to create a new virtual resource to support the exploration of renaissance drama around the globe. While there have been several important initiatives to digitize the many texts attributed to William Shakespeare, the Folger's Digital Anthology of Modern English Drama hopes to create a platform that will allow users to browse, search, download, curate, and read first edition plays by Shakespeare’s contemporaries in a variety of formats. This is just the sort of project that Mason's Roy Rosenzweig Center for History and New Media (RRCHNM) does best.

Supported by a $300,000 grant from the National Endowment for the Humanities, the Digital Anthology of Modern English Drama tapped RRCHNM to build a flexible, online platform for non-shakesperean plays performed on a professional stage between 1576 and 1642, the era of the first commercial playhouses in London.

Kelly Schrum and the rest of the project team at RRCHNM have been learning a lot about early modern English drama over the past year. Schrum is the center's director of educational projects and a historian herself. “[At RRCHNM] we understand the history, the meaning behind the data and we understand digital content management,” Schrum explains. She describes her role as, “translating between the professional developers and scholars, knowing what’s possible from the tech side and how to make the data work within the digital platform.” And there is a lot of data. RRCHNM began with the list of 403 plays that will be included in the initial release, and this was just skimming the surface. With the Folger’s long tradition of scholarship and editing, the project staff, Meaghan Brown and Lizzy Williamson, with the help of curators and cataloguers, had compiled immense amounts of metadata on each work that was shared with RRCHNM in 2015.

Schrum says that the work has been fascinating. For example, it was not uncommon for two different printers to have the same name. “There are six plays printed by men named Thomas Purfoot. Two were printed by the father and four by his son. There are a lot of data issues to sort through. It’s so interesting.” 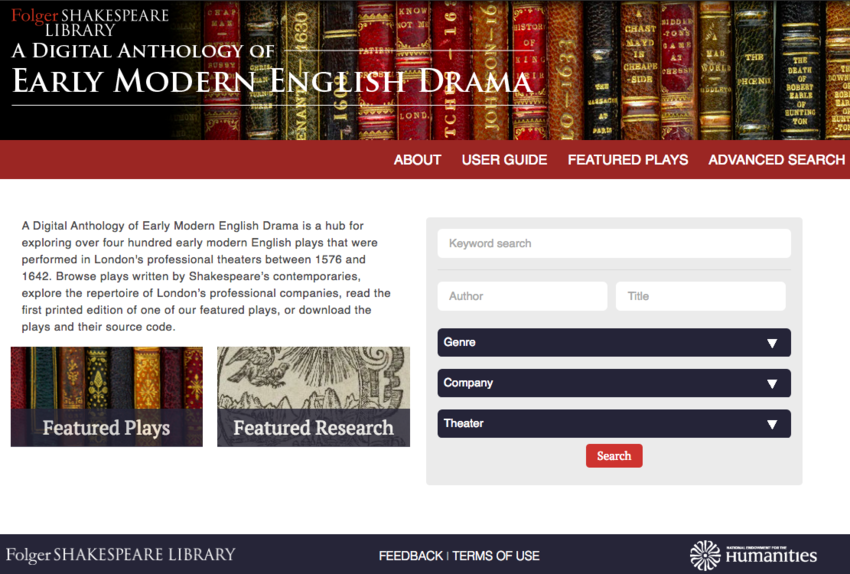 "Interesting and challenging," Schrum recalled on how the RRCHNM team and the Folger staff dealt with the inherent uncertainty in the data set. "Databases do not like uncertainty. In some cases, the uncertainty could be resolved, but in many cases the uncertainty came from genuine points of contention currently under debate by scholars. There really is no definitive right answer.  So they worked together to find the best solution that allowed the system to work well, while still properly representing the uncertainty."

Schrum is pleased with the results of all this hard work. She says her favorite part of this, and all of RRCHNM’s projects, is “trying to understand what the audience needs and how we can meet those needs in the most useful and visually appealing way.”

Senior associate dean Robert Matz has been following the digital anthology project with special interest.  Matz explains, "One of [his] favorite things about Mason is our proximity to institutions like the Folger Library or the Smithsonian.  I think this project is really exciting, not least because, as a Renaissance scholar myself, I know how powerful a resource this platform will be to readers of Renaissance drama. And it couldn't be in better hands than those of the RRCHMN and the Folger."

In June 2016, the Folger Theatre and RRCHNM will be holding a workshop called "Beyond Access: Early Modern Digital Texts in the Classroom" for select university faculty to explore classroom applications for digital playtexts included in the new anthology.