Although many students have heard that George Mason authored the Virginia Declaration of Rights, many fewer realize that he was also a substantial slaveholder. At his plantation at Gunston Hall, less than twenty miles from the university, Mason held around one hundred men, women, and children in bondage, making him the second largest slaveholder, after George Washington, in Fairfax County at the time. Slaves were the major source of labor on Mason's plantation and a primary source of his wealth. 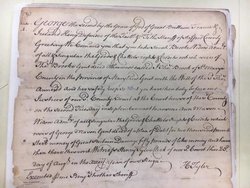 OSCAR team members worked closely with the staff of Gunston Hall as they undertook research on the project. Students received a special tour of Gunston Hall, highlighting the places where enslaved people lived, worked, played, and formed the bonds of community. They saw archeological ruins that reveal what slaves wore, what they ate, and what consumer goods they possessed. They went into Gunston Hall's archives to examine primary sources that show, directly and indirectly, how Mason treated his slaves and what he thought about the institution of slavery.

The Enslaved Children of George Mason website presents the team's findings. Students compiled a number of primary source documents that shed light on the daily lives of Mason's slaves. Documents include a letter from George Mason to his son discussing a smallpox epidemic and the inoculation of his enslaved people; an advertisement from Thomson Mason, George Mason's brother, who was himself a slave trader; photos of the back door and stairway in the mansion that the slaves were required to use; and a drawing of the slaves' burial ground.

Professors Carton and Manuel-Scott hope to continue the project in the future. They expect to add more documents to the website as more sources are uncovered. They hope to work with the staff at Gunston Hall to undertake more collaborations, especially in exploring the archeological remains on the plantation. Finally, they believe there is much more to be done in order to help students understand one of the most profound issues arising during the American Revolution: the fact that patriots who promoted freedom for white people at the same time enslaved black people. By studying George Mason's enslaved people, Mason students have had a firsthand opportunity to grapple with the complexity of such issues for themselves.