Dr. Vanessa Schulman is a specialist in the art and visual culture of the United States. She received her PhD in Visual Studies from the University of California, Irvine, in 2010, and has published her research in the academic journals Invisible Culture, American Periodicals, and Early Popular Visual Culture. Her book, Work Sights: The Visual Culture of Industry in Nineteenth-Century America, published by the University of Massachusetts Press, was the winner of the 2016 International Committee for the History of Technology book prize for junior scholars and was selected as a CHOICE Outstanding Academic Title for 2016. She will be offering classes on colonial through twentieth-century American art and architecture, history of photography, and other thematic art history courses.  Though she is busy settling in and getting to know new students and colleagues, she took the time to answer a few interview questions for us.

Dr. Schulman brings an unusual set of interests and skills: she comes from “an odd place,” as she puts it, in that she has a background in traditional American studies, but also an interest in art history and particularly in “visual culture,” the study of the way visual images “work.” “I’m trying to combine all those strains in my teaching and research.”

“Some of my work concerns traditional American Studies questions like ‘what is American culture’ or what is ‘distinctive about American art,’ but I’m more generally interested in ‘visual culture’,” which is a way of getting at how the things we become accustomed to seeing shape and are shaped by our sense of the world: “how visual mechanisms work,” Schulman says, “how information is conveyed visually, how different ways of framing images contribute to conversation about those questions.”

Do you work with traditional forms of art only?

Schulman works with painting and sculpture but also with commercial representations. “I work a lot with Harper’s Weekly, which is really rich,” she says, and “a great text for looking at American life.”

The large format magazine specialized in prints on current events which it could turn out quickly, for a very large audience. It covered natural disasters, World’s Fairs, new inventions but also political satire and political commemoration.

“Harper’s is complex and contradictory, and very strange politically with strongly mixed messages. On the one hand it was committed to racial equality, and depicted the commitment clearly—there’s a famous image of Uncle Sam inviting the nations of the world to sit together at the Thanksgiving feast. But it often published ugly racial caricatures, too.” 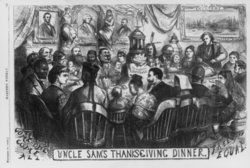 Your book is very interested in machines and technology. Do you consider yourself a historian of technology?

“Sort of! Technology is hard to define. What I became interested in has to do with the emergence of large scale printed periodicals and the way that the representation of industrial production of goods mirrored the way the magazines themselves were produced. My book deals with the history of technology, not technological processes but how visual images get people to imagine technological processes. I don’t really know how machines work except in the most basic way.”

The scale of 19th century technology was so vast. Did that spark your interest?

I remember a moment when I was touring the Lowell Mills in Massachusetts,” Schulman says. The Lowell Mills were the first really large scale factories in the US, and they employed tens of thousands of people making cloth in huge factories. “The moment that really helped dramatize the scale and scope of industry was at the Boott Mill, when they turn on one machine and it shakes the entire building and you see how many machines there were, stretching in a vast line: that was a moment when the scale of production was made dramatically clear.”

I’ve done that tour! The human beings seemed dwarfed by the noise and the size of the place.  And the fact that it was almost all young women working in this precise, powerful machinery is interesting.

“Yes and it’s important to notice how much images of technology don’t really get to that; and rarely offer any kind of critique of what industrialization did. They usually serve a booster role: no obvious recognition that technology has done anything other than make things better.”

“My course on the Art of the United States is kind of a traditional survey, but it treats art as a visual representation of the culture of the US, so it has to include religion, problems of race and class, the technology and economics of art making.”

Often when I’m teaching I find myself stunned by a piece of art or music and I just want to stop and say “wow, do you see how good that is?”

“Yeah! I have detailed notes and I have a narrative I want to create, but often I’ll get stuck on one particular image because it’s so good, and I’ll tell them we are really going to dig into the details that makes this effect; the brushwork, the massing of light and shade; visual choices; the things that art history traditionally explores.”

What’s your favorite class for undergrads?

“I really enjoyed teaching the American Civil War and Visual Culture.  It’s one of my favorite classes. I’ve been planning a book about some of the art and literature of the Civil War and its aftermath. This Spring I plan to include more contemporary art. One of the great things about being in DC is the museums: the Hirshhorn has just presented a huge panoramic work by the artist Mark Bradford called “Pickett’s Charge,” which directly references the famous cyclorama painting at Gettysburg. Or the Smithsonian Museum of American Art, which has an exhibit on Kara Walker’s fascinating re-use and adaption of Harper's Pictorial History of the Civil War.” 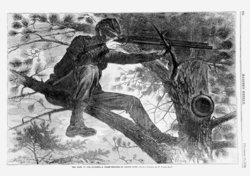 “I’m also interested in developing a course on views of science and scientific imagery vs. irrationality and magic. Imagery of technology often combines the coldly rational with magic and spectacle. I’ve done a lot of research on depictions of the telegraph, in which the practical, the rational and the mystical were blended. I think a course that looked at how these things co-existed would be useful and interesting.”