The Virginia Association of Museums is raising awareness of the need to preserve historical artifacts by holding a contest to award grants of $4000-5000 to local historical societies seeking to preserve their treasures. VAM recently announced its list of Virginia's Top 10 Endangered Artifacts, which include a mix of texts and material culture.

For example, the African American Historical Society of Portsmouth is seeking funds to preserve a segregation era “colored” sink from the 1950s that speaks to the divisive racial tensions that once plagued the state. In Northern Virginia, Alexandria's Office of Historic Alexandria is seeking help with its discovery of an 18th century merchant ship during construction of a waterfront hotel in 2015. You can peruse the full list here. 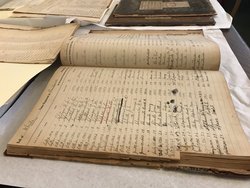 One of Mason's own is also raising awareness for an item on the list. Lisa Struckmeyer (BA, History, 2012, and MA program in Anthropology) is an historian for the Prince William County Historic Preservation Foundation, which is seeking to preserve and restore Prince William County Poll Books from the turn of the last century.

The poll books document efforts to disenfranchise poor, black, and female voters by imposing poll taxes and literacy tests that resulted in 88,000 voters being removed from voter rolls. In a year when control of Virginia's House of Delegates was determined by a single ballot and then drawing lots, the importance of the franchise has never been more clear.

Go here to cast a vote for this artifact!

The contest runs through January 24th, and people may vote daily for their favorite artifact.