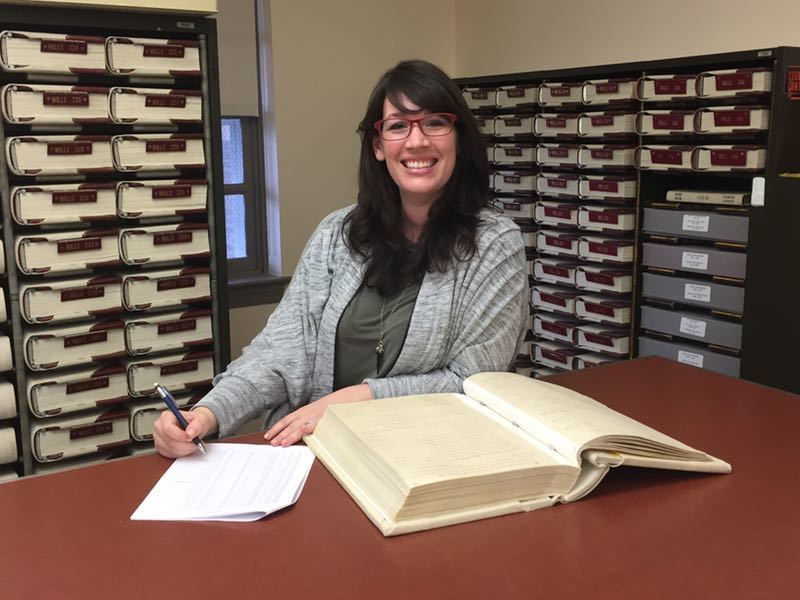 My internship was at the Fairfax Circuit Court Historic Records Center, just down the road from George Mason. They advertised for interns via email, and though I originally thought the internship was only for students interested in law, it turns out they have potential projects for anyone, no matter what their interest or focus.

I worked on an indexing project in which I annotated any mention of slaves or indentured servants in the probate records from 1740 – 1865. Probate records are wills, household inventories, estate accounts and guardian accounts recorded by the county clerk. For instance, George Washington’s and George Mason’s wills were both probated at the Fairfax County courthouse. I went through all the probate records for that time period and noted if the testator: 1) had slaves, 2) if names, last name, and/or ages were listed, and 3) if there was an emancipation.

I love that I worked on something that hadn’t been done before. With the exception of two probate records from 1740 – 1865, all of the indexed persons were white. Because the indexing of slaves was a new project, there were no procedures in place to identify and index people of color. If all goes well, Fairfax County will set an example for other counties in Virginia about how to index the records of enslaved African Americans, which is a tremendous help to historians and genealogists.

I am proud of being the only person that has ever read those documents line-by-line. There were so many stories in those wills. Some contained some pretty scandalous stuff, while others were almost like love letters to their families and friends. When I closed that final will book from 1870, it was like finishing a book series--except the stories were about real people.

My biggest accomplishment was simply making it through one hundred twenty years of probate records. I read through twenty-eight will books that were about two hundred fifty pages each. When I chose the project, I wasn’t sure if I would make it through all the books before the end of the semester. But I did, and now I have a next step for the project going forward, which I will be starting in the fall. I’ve really grown attached to this project and I can’t wait to see it through to the end.

This internship introduced me into the world of the archival research. Although the professions work hand-in-hand, the role of the archivist is quite different from a historian. The archivists’ role is to preserve, process, and store materials for use by historians and researchers. We did, however, have some historians working in the archives while I was working on my project. I was impressed with the amount research and work that goes into a single article. I got really excited whenever I would find some data in the probate records that helped their research.

It was also amazing to see how much a historian can glean from one set of documents. From just one guardian account, I learned that I can find out who was teaching school at the time, who was working as a tailor/shoemaker, and even fashions of the era. I also know how to find out if an estate contained slaves, who they were hired out to, and for how much. That is just one type of document found in the probate records; and the probate records are just one type of record set in the county archives. The different ways these records can be used for research is infinite!

I would just like to encourage anyone hesitant to apply for internships to go for it! My internship experience was not at all what I expected. I thought the process would be just hunting and noting, with pretty dry information. It was anything but! There were two other interns in the office and we were constantly showing each other our exciting finds. We all grew a pretty strong sense of ownership over our individual projects. The internship was also a nice break from the daily grind of being a student. My project became a solace away from writing and studying. I didn’t have to study or interpret my findings. I was able to just read my will books, make my annotations, and soak in the stories and history.