China’s rapid development directly impacts the lives of just about everyone in the United States. CHINA Town Hall is a national day of programming on China involving seventy cities throughout the United States and is intended to provide Americans the opportunity to learn about and discuss critical issues of concern with leading China experts. 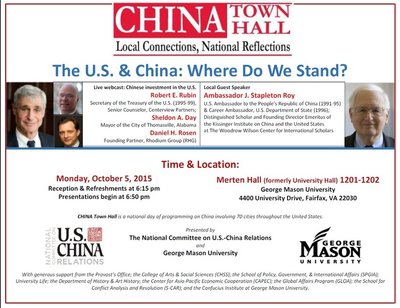 The evening will begin with a reception and refreshments (hors d’oeuvre) at 6:15 p.m. The program itself will begin at 6:50 p.m. with opening remarks and a live webcast featuring a panel discussion with Robert E. Rubin, 70th Secretary of the Treasury of the United States (1995-99); Sheldon A. Day, Mayor of the City of Thomasville, Alabama; and Daniel H. Rosen, founding partner of the Rhodium Group (RHG). The panel will focus upon Chinese foreign direct investment (FDI) in the U.S. and will be moderated by Steve Orlins, President of the National Committee on U.S.-China Relations.

The webcast will be followed by a discussion with special Mason guest Ambassador J. Stapelton Roy, former U.S. Ambassador to the People’s Republic of China (1991-95) who is now Distinguished Scholar and Founding Director Emeritus of the Kissinger Institute on China and the United States at the Woodrow Wilson Center for International Scholars in Washington, D.C. Ambassador Roy enjoyed a long and distinguished career which focused on East Asia and the Soviet Union and included ambassadorial assignments in Singapore, China, and Indonesia as well as his final post as Assistant Secretary for Intelligence and Research at the State Department. In 2001 he was named as the recipient of Princeton University’s Woodrow Wilson Award for Distinguished Public Service. Drawing upon a lifetime of government service and engagement with China, Ambassador Roy will share his thoughts on the current state and future prospects for the U.S.-China relationship, especially following Chinese President Xi Jinping’s state visit to the U.S. in September. Ambassador Roy will then address any questions that members of the audience might have.

Join us on October 5, 2015 to learn more and have your own questions answered.

This event is free and open to students, faculty and the general public.