While the exhibition does not attempt to explore the depths of Latin American artistic cultures, it illustrates the breadth and variety of art forms that functioned as mediums of subversive communication: from traditional paintings to science fiction comics and murals. For example, Antônio Henrique Amaral’s Pop Art paintings of bananas, tied up, cut, rotten and devoured, symbolized the complexity of Brazil’s national identity and its dependence on foreign countries, particularly the United States. Similarly, Argentina’s El Eternauta comic series illustrated a group of local underdogs fighting an alien invasion – an allegory for the tense relationship between Argentina and the United States. Finally, Chile’s Brigada Ramona Parra painted large colorful murals that expressed concerns over the disappearance of relatives and called for the rights of indigenous people and industrial workers.

Although the exhibition focuses on Latin American movements, they are inextricably linked to the history of American political and cultural involvement in the region – a fact Heather suggests in her analysis. Additionally, Heather’s attempt to encourage these thematically and regionally related artistic movements to speak to each other, highlights the importance of a comparative and a global approach to the study of art and history. Finally, the exhibition brings our attention to the challenge of finding innovative ways to communicate history and poses the broad question of what it means to exhibit history. 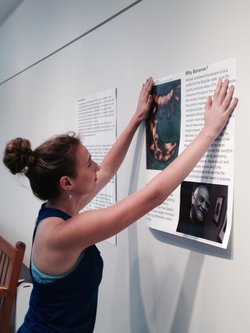